Get the Webinar Recording: Money Conversations with Gen Zers & Millennials

We know an income gap exists between how much money women and men make.  In the Logica Research Future of Money Study, we see the gender pay gap extend into the side hustle.  The availability of additional ways to make income in the form of the side hustle (40% of U.S. adults report having a side hustle), doesn’t necessarily mean the same thing for men and women. 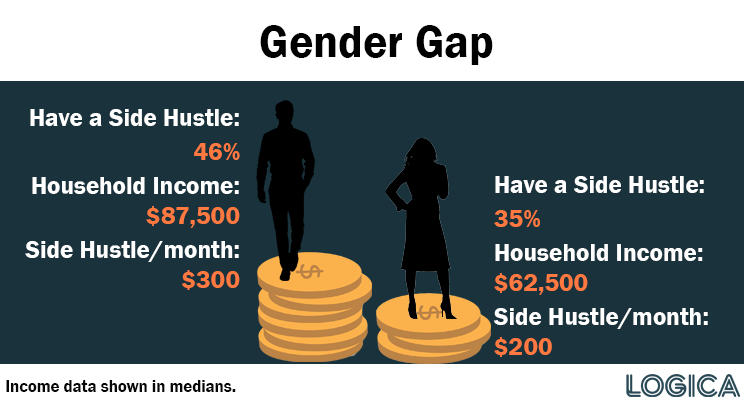 How income from their side hustle is being used is relatively similar: both men and women are most likely to use funds for living expenses.

While it’s no surprise that the financial situations and needs of men and women are different, it is important to ask: What are the unique needs of women who have a side hustle?  Women aren’t looking for pinkification of their finances.  How are you evolving your messages and tools to support women in growing and managing their money with different income streams?

Engage in the conversation: engage@logicaresearch.com

The Logica Research Future of Money Study is conducted by Logica Research and is designed to provide insights to organizations to help improve people’s financial lives. The study is conducted online among 1,000 U.S. General Population Adults 18 and over.  The sample is balanced on gender, income, and age. The study includes an augment sample of 200 older Gen Zers (16-19), which is not included in total. Results are not weighted.

Sign up for our thought leadership and insights on research.

This website uses cookies to improve your experience while you navigate through the website. Out of these cookies, the cookies that are categorized as necessary are stored on your browser as they are essential for the working of basic functionalities of the website. We also use third-party cookies that help us analyze and understand how you use this website. These cookies will be stored in your browser only with your consent. You also have the option to opt-out of these cookies. But opting out of some of these cookies may have an effect on your browsing experience.
Necessary Always Enabled
Necessary cookies are absolutely essential for the website to function properly. This category only includes cookies that ensures basic functionalities and security features of the website. These cookies do not store any personal information.
Non-necessary
Any cookies that may not be particularly necessary for the website to function and is used specifically to collect user personal data via analytics, ads, other embedded contents are termed as non-necessary cookies. It is mandatory to procure user consent prior to running these cookies on your website.
SAVE & ACCEPT

Sign up for our thought leadership and insights on research.

Let’s get started on getting the insights you need to grow your brand.